Modern GPUs require massive amounts of throughput to feed the data pipeline. However, legacy virtualization and cloud infrastructures cannot deliver the necessary storage IO, resulting in low GPU utilization. This is critical for supporting workloads that demand top performance with the smallest possible footprint, including AI at the edge.

Sunlight NexVisor drives millions of input-output operations per second (IOPS) per virtualized instance with ease, allowing 100% utilization of GPUs and enabling high-density, high-performance cloud at a fraction of the cost and energy consumption, offered by legacy virtualization technologies.

Nvidia GPU support for Sunlight's hypervisor designed to boost the performance of edge AI deployments and support the most demanding workloads out there, with the highest throughput and lowest latency possible.

The following sections describe the process for launching a virtualized Sunlight instance attached with a PCI device, leveraging GPU utilization.

This section refers to the functionality of reviewing the PCI devices which are currently attached on the system. Select the Administration settings page and click on the "details" option of the PCI devices section, as illustrated below. 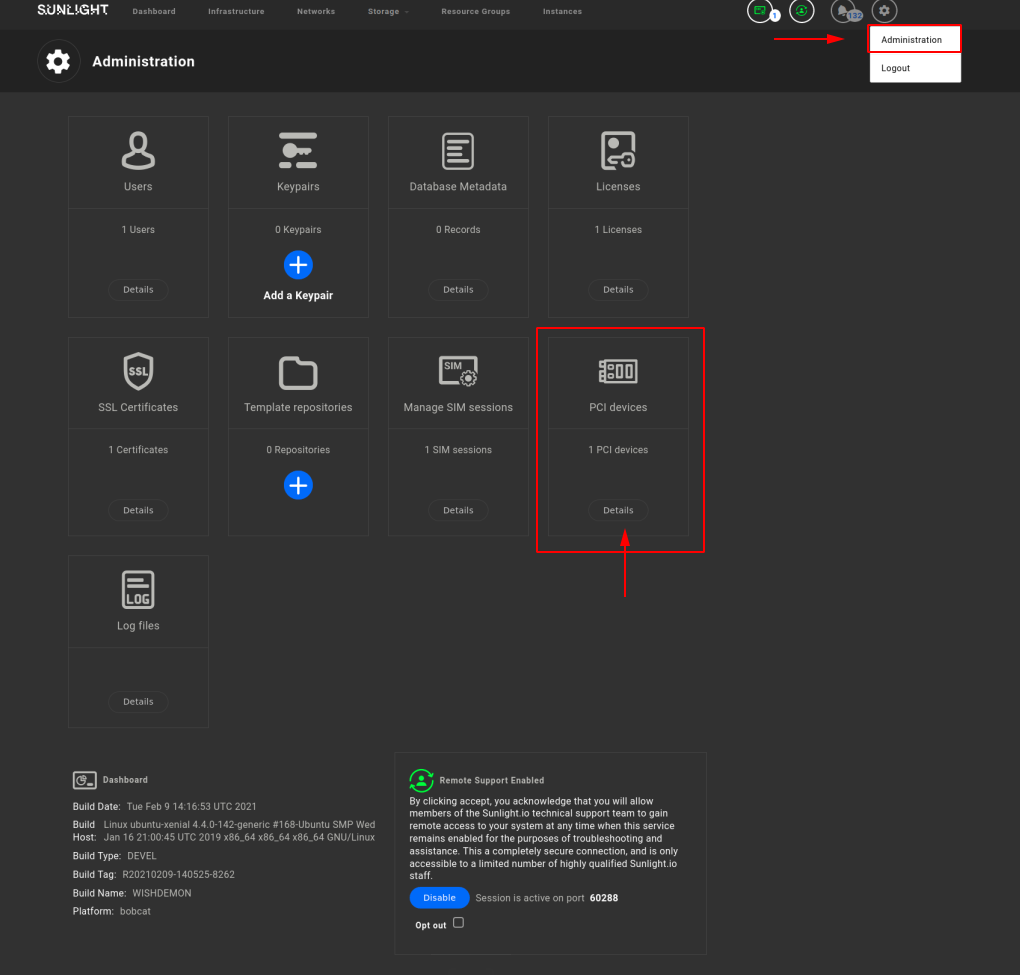 All of the PCI devices which are currently attached on the system are listed in this page.

Add a GPU device in a resource group

In order to be able to launch a Sunlight virtualized instance with GPU support, a resource group attached to the selected GPU device should be created. Follow the steps described below for adding a GPU device during the creation of a resource group.

Once the resource group with the included GPU is configured, an instance can be created by selecting this resource group and the GPU device, as described in the next section.

To create an instance with GPU passthrough support, click the Create Instance button and go through the steps as described in the section Instances and Clusters :

As soon as the Sunlight Instance is booted up, the user is able to review the attached GPU by selecting the specific Instance and clicking on the PCI devices tab, as illustrated in the following images:

Once a GPU device is attached to a specific Instance, it cannot be utilized by other Instances.

The following steps will assist you in validating that the GPU is properly attached to the guest VM :

Please follow the next steps in order to validate the GPU passthrough on the guest VM :

Persistence Mode is the term for a user-settable driver property that keeps a target GPU initialized even when no clients are connected to it.

In our setup, this persistence mode should be disabled by the user before using the device, in order for the GPU passthrough to work properly on the VM guest.

The persistence-mode is enabled by default on the NVIDIA driver. For this reason, the user needs to disable this as soon as the NVIDIA driver is installed or the VM is booted up, by executing the following command :

Howerver, this mode state does not persist across an instance reboot, so the user needs to re-disable this persistence mode each time the VM guest is booted up again.

To disable this persistence mode permantly, the user should edit the following daemon unit file /etc/systemd/system/multi-user.target.wants/nvidia-persistenced.service and add the --no-persistence-mode option as depicted below

In case the peristence mode is not disabled after an instance reset, the GPU device cannot be utilized again for this or any other instance which is going to use this device in the future. In such a scenario a full power cycle of the NexVisor node with the attached GPU device is needed, in order for this GPU device to be utilized again.